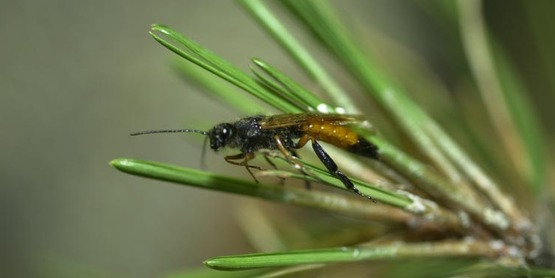 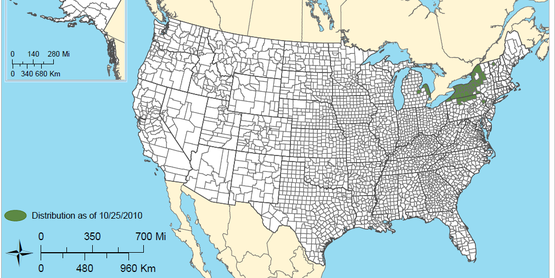 Sirex woodwasp—Sirex noctilio F. (Hymenoptera: Siricidae) is an invasive insect that attacks pine species, including Scots Pine and Red Pine.  It was found in Oswego County in 2004 and since then has spread throughout much of New York State. In its native range of Eurasia and North Africa, sirex woodwasp is considered a secondary pest which attacks suppressed and stressed trees. However, where introduced in the Southern Hemisphere, it attacks exotic pine plantations and causes severe mortality.  Research of a parasitic nematode and several hymenopteran parasitoids as biological control agents, many of which are native to North America, have been successful.

Females inject a symbiotic fungus, toxic mucus, and eggs (25-450) into stressed trees. The synergistic effect of the fungus and mucus, not the actual insect, cause to weaken and kill trees.

Sirex Woodwasp Factsheet from the USDA Forest Service, describes the insect, and includes photos and information on identification, distribution, signs of infestation, biology of the wood wasp, and biological controls.

iMapInvasives is an online tool for invasive species reporting and data management.

There are no upcoming events