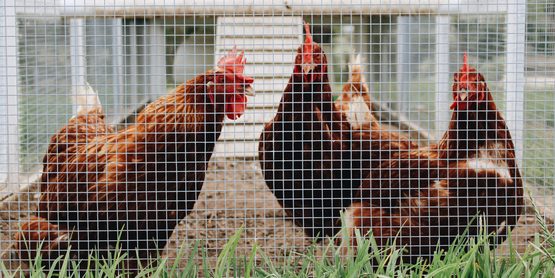 Since the beginning of 2022, nearly 450 cases of Highly Pathogenic Avian Influenza have been identified in U.S. wild bird populations. Cases in the backyard and commercial poultry flocks are on the rise, and it’s important now more than ever to keep an eye out for suddenly high mortality in your flocks and to report any suspicious whole-flock illness.

What is Avian Influenza (AI)?

Avian Influenza is a highly contagious poultry virus that has the potential to cause large financial losses to the U.S. poultry industry. A highly pathogenic strain (HPAI), H5N1, last hit the U.S. in 2014-2015 and was considered the nation’s largest animal health emergency. Over 200 cases of the disease were found in commercial flocks, backyard flocks, and wild birds. More than 50 million birds were affected and subsequently died or were euthanized on more than 200 farms in 15 states.

Where does it come from?

Waterfowl, both wild and domestic, act as carriers. Since the outbreak of 2014-2015, scientists have been monitoring wild bird populations, and waterfowl hunters send their harvested birds in for testing. Wild waterfowl regularly carry low-pathogenic strains of the virus, but it can easily mutate to a highly pathogenic strain, as we’ve seen this year.

Why should I be concerned?

Since the middle of February, we have seen 4 laboratory-confirmed cases of Highly Pathogenic Avian Influenza. Two were identified in-game bird flocks – one in Dutchess County and one in Suffolk County. Two backyard flocks have also been affected – one in Suffolk County, and one in Ulster County. These flocks have been euthanized to help control the spread of the virus.

While these are only four cases, it is anticipated that there will be many more. There are currently nearly 450 cases that have been identified in wild bird populations along the eastern portion of the United States. As of March 25th, 2022 there have been 60 cases in the backyard and commercial poultry flocks across the eastern and central U.S. Cases in commercial and backyard flocks will likely increase as wild waterfowl migrate northward in the coming months.

How does it spread?

HPAI lives in the respiratory and/or intestinal tract of birds. It can be picked up from contact with infected feces, surfaces, or through the air, though ariel transmission from farm to farm is unlikely. It can be transported on infected feed, clothing, or equipment. Once on the farm, the disease is readily passed from bird to bird, infecting an entire flock quickly.

Which flocks are affected?

Flocks of any size, from the backyard to commercial, and any species can be affected.

Any birds can be affected, but birds other than waterfowl react most strongly to the virus. Poultry infected with HPAI may show one or more of the following symptoms:

A high level of mortality without any clinical signs is known to be a hallmark of the virus. In some cases, expect 100% of the flock to die within a few days. Regardless of how the disease presents, a large portion of the birds in a flock will be affected. Waterfowl may carry the virus but not show symptoms.

What do I do if I think I have HPAI in my flock?

Report it! If your birds are sick or dying, it's important to report it immediately so that we can stop the spread to any other flocks. You can call:

What can I do to manage it?

Because there is not a vaccine currently available in the U.S. for this disease, keeping it out through biosecurity is going to be the best course of action. The easy-to-follow biosecurity principles below can go a long way to keeping your birds safe from disease:

Banning the borrowing or lending of equipment or vehicles

Banning visits to other poultry farms, exhibitions, fairs, and sales or swap meets (if visits must occur, direct workers to change footwear and clothing on their return)

Banning bringing birds in slaughter channels back to the farm

If you have any questions about this disease, please contact your local Cornell Cooperative Extension Office. The information used to create this article is shared by the United States Department of Agriculture – Animal Plant Health Inspection Service (USDA-APHIS). Media inquires can be directed to cce-communications@cornell.edu.